I’m reading Sigmund Freud, and this paragraph sounds like a whole lot of bull to me:

On the Electra complex, Freud was more vague. The complex has its roots in the little girl’s discovery that she, along with her mother and all other women, lack the penis which her father and other men posses. Her love for her father then becomes both erotic and envious, as she yearns for a penis of her own. She comes to blame her mother for her perceived castration, and is struck by penis envy, the apparent counterpart to the boy’s castration anxiety. The resolution of the Electra complex is far less clear-cut than the resolution of the Oedipus complex is in males; Freud stated that the resolution comes much later and is never truly complete. Just as the boy learned his sexual role by identifying with his father, so the girl learns her role by identifying with her mother in an attempt to posses her father vicariously. At the eventual resolution of the conflict, the girl passes into the latency period, though Freud implies that she always remains slightly fixated at the phallic stage.

Ok, at least I agree with this. But I think this guy is probably a sexually dissatisfied individual. Most (if not all) of his theories are linked to sex. Lol.

Freud insisted that dreams are a form of fulfilling suppressed wishes. If a wish (likely to be sexual in origin) goes unsatisfied during the dreamer’s normal day, the mind reacts to this ‘internal stimuli’ by transforming it into a visual fantasy – allowing the dreamer to satisfy his or her desire. The result of which is a peaceful night’s sleep.

I also tried on this dress that looked good on the rack, but ended up looking like a nightgown. Lol. 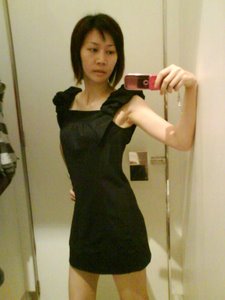 I received my desired job offer today! The pay is as I expected, but the most important thing is, I’ll be working on things I like!To avoid the GST hike, I went vivocity to grab some work clothes. Saw this little black dress at GG>5. It’s gonna look real cute with black stockings. 😛 Anyway, it’s $100+ so I didn’t get it.

I think I look really sallow in the picture. Can’t wait to eat heartily again. 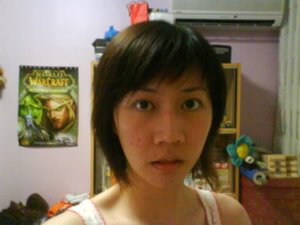 The sausage lips are gone, but my chin is still swollen. Also, one side of my jaw has a blue black! The amazing thing is, it doesn’t hurt. That whole portion from my lower lip and below is all numb. When i’m washing my face, it’s like washing meat. I just discovered that today. Bikkurimashita!

Why this bird’s eye view? Well, earlier his mouth was inside the bowl and chewing on the food. Got so lazy or not? He had to lie down next to the bowl to eat?! -_-

Sian man, I’m like a Sim with Money Aspiration. I wanna go out and earn money. I’m sick of the plate in my mouth, sick of being perpetually hungry, sick of feeling undernourished.

I want a job too.

Just got back from my after op review. The doctor says she can only remove the stitches and stuff next Saturday, which means I’ll still look like a 白痴 during commencement. Lol. My mom says isoke, cos she plans to take studio shots of me in my graduation gown, and not take photos during the commencement itself, which is like, next Friday. Damn fast can! And NUS haven’t pay me for the HYP survey yet. !#@$!#@%$!# While I’m still !#@$!#-ing, I have to endure porridge and soup for another week! I’m already feeling undernourished and hungry and angry and unhealthy. D: I can’t stand it when I don’t get to eat! RAWR! 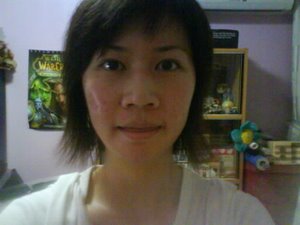 In case you all miss me, here’s a pic to update. Haha. Less swelling but there’s a plastic plate in my mouth so I can’t eat solid food yet. I’m damn angry at having to go hungry everyday.Anyway, don’t harbour thoughts of visiting me or what cos I only wake up for couple of hours to slurp porridge/soup and drink my meds before I KO till the next medication timing. 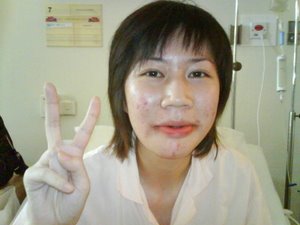 Lol! I look like I have sausages for lips! Was in ICU for the whole of last night till this afternoon. It’s a nice place, the bed will auto adjust to fit my body contours and I had 5 nurses attending to me. 😀

They assigned a male nurse to me when shifts changed this morning. The nurse look like Shawn. Haha. Now i’m in a normal ward full of ah mas.

My cousin’s into scrapbooking and recently she discovered the wonders of Photoshop. She made this from the photo we took after a hair dye session.