In the Carlsberg Sky Tower

Some pics taken in the Sky Tower…

We went to try the Luge Ride. Basically you sit on this little thing and you roll down the hill on it. Lol. It has only 2 controls, stop and go. Acceleration is entirely based on inertia and the slope of the hill.

My head seems to be too big. Lol.

After the ride, we took the skyride back up the hill. It’s like those swinging chairs that people take up mountains at skiing resorts. We were too scared to take any pictures while on the ride. Lol. The people in front of us kept laughing at us making weird scared noises. Lololol.

We wanted to take two shots of this, but while posing for the second shot, water suddenly shot out from one of the holes in the structure and struck JJ on her right shoulder. Lol. Everybody burst out laughing and XJ managed to block the second water spurt with her shoe. Lol. It’s one of those you had to be there moments. We couldn’t stop laughing afterwards and tried to make JJ buy a merlion t shirt to change into. Hahaha.

Check out this cover girl shot of 好姐妹. Actually I was trying to capture the sign board! Bing Jin open sugar cane store lei. Bo jio. What happened to TS 甘蔗水? Lol. 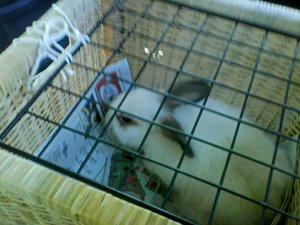 Brought ah bit to the vet today cos he’s been botak for too long. He’s diagnosed with fur mites, which caused the balding, and also suspected hormonal changes which can cause balding too. The vet said she’ll treat the fur mites first and if his fur doesn’t grow back, we’ll control his raging hormones. Lol.The medicine is really amazing. She applied it to his skin and the effect will spread throughout his body and kill the fur mites. All i have to do is brush off the dead mites weekly. So convenient! 😀

Wahaha, check out my xialan face. Anyway, I had 2 deadly pimples over the fortnight – one after another. JJ managed to catch my previous one on camera and this picture is to show the new one. Looks damn deadly and it hurts like hell. Lol. 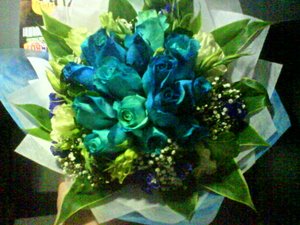 Heehee. The perks of being a girl. I got this plus 2 air plants. Really like the air plants… But dunno what to do with this. 😡 bouquets are supposed to be brought out to haolian to the public one lo. 😡